Pakistan is setting new targets of development by creating economic linkages with Central Asia and taking the pathway of regional prosperity that traverses through a peaceful Afghanistan.

The country, after its significant shift from geo-strategic to geo-economic policies, in line with the vision of Prime Minister Imran Khan, has embarked upon a journey where all roads of regional integration lead to progress.

However, Pakistan has termed peace in Afghanistan as the “foremost factor” to materialise such a vision of prosperity.

The premier has repeatedly emphasised that Pakistan is the “most interested” in the resumption of peace in Afghanistan, for its own interests.

“Pakistan is concerned for peace in Afghanistan because the country’s economic strategies greatly depend on it,” he said in a recent conference with visiting Afghan journalists in Islamabad.

According to the PM, a peaceful Afghanistan could act as a corridor for Pakistan’s trade route to Central Asian states besides benefitting itself from Pakistan’s Gwadar seaport.

Pakistan, Uzbekistan and Afghanistan on February 2 agreed to a roadmap for the construction of a 573-kilometre route from Mazar-e-Sharif to Peshawar via Kabul.

The project, at an estimated cost of $5 billion, will open Pakistani seaports on the Arabian Gulf to Uzbekistan and continue Afghanistan’s gradual integration into the Central Asian economic system.

The new corridor will improve connectivity with an annual transit potential of up to 20 million tons of cargo transportation.

PM Imran and Uzbek President Shavkat Mirziyoyev in a virtual meeting on April 14 had supported the construction of the ‘Termez–Mazar-e-Sharif–Kabul–Peshawar’ railway line, calling it an important initiative to establish connectivity from Central Asia to the Arabian Sea through Afghanistan and the Pakistani seaports of Karachi, Gwadar and Bin Qasim.

During a recent visit to Uzbekistan in July, the prime minister stressed that Pakistan’s trade relationship was going to depend on how quickly the countries were able to connect with each other. 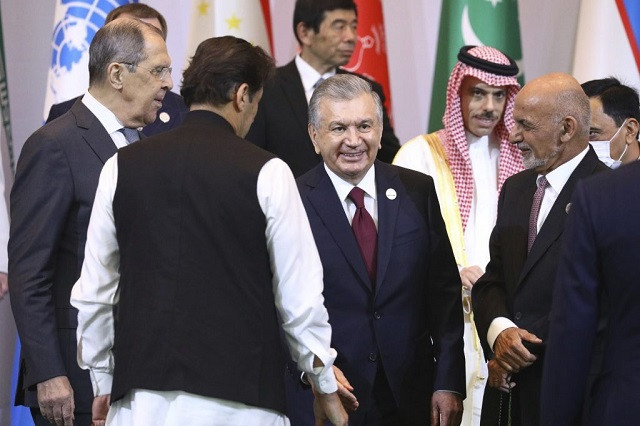 Prime Minister Imran Khan, at the Tashkent summit in July, with leaders of South and Central Asian countries. PHOTO: APP

He termed the trans-Afghan railway project as the most important project for Uzbekistan and Pakistan.

“For Pakistan, it connects us to Central Asia, to Uzbekistan which is the biggest of the Central Asian republics and beyond,” he said.

In his address to the leaders participating in the Tashkent’s ‘Central and South Asia Summit on Opportunities and Challenges’, PM Imran spoke about the situation in Afghanistan, where he said Pakistan wanted a political settlement in the neighbouring country for “mutually beneficial” connectivity between Pakistan and Uzbekistan, and other Central Asian countries.

“Pakistan desires lasting peace in Afghanistan, and is making all possible efforts in this regard,” he said in Tashkent, expressing hope that regional connectivity would prove as a harbinger of progress for the entire region.

Following the meeting of PM Imran and the Uzbek president, Chaudhry said the two leaders expressed the desire of running a train service from Gwadar to Tashkent and a truck service from Karachi to Tashkent.

Commerce Adviser Abdul Razak Dawood says that Pakistan is looking to intensify trade with neighbouring Afghanistan and the countries of Central Asia with an aim to diversify trade beyond the top players.

The US withdrawal from Afghanistan promises a return of stability and provides an opportunity to Pakistan to strengthen commerce with its neighbour, which sits at the crossroads of South and Central Asia.

Islamabad stands to benefit from greater trade with Central Asian markets that are rich in energy resources to develop its industrial base.

Pakistan believes that political settlement in Afghanistan is the major factor that can guarantee efforts towards prosperity.

Experts say that South Asia-Central Asia connectivity will benefit many countries. The railway line from Mazar-e-Sharif through Kabul to Peshawar will reduce Russia’s north-south route by up to 600 kilometres. Similar reductions in distance and shipping times apply to China’s trade with South Asia and East Africa.

An announcement by the US, Uzbekistan, Afghanistan and Pakistan on July 15 agreed to establish a new quadrilateral diplomatic platform focusing on enhancing regional connectivity, giving further strength to the notion.

With ‘peace’ and ‘regional connectivity’ as the main elements of its geo-economic strategy, experts are sure that Pakistan is going to make rapid strides in diverse fields – up to Central Asia and beyond.

Pressuring Gibbs not to participate in KPL strongly condemnable: Fawad

Pakistan PM: ‘US Really Messed It Up in Afghanistan’